Tomato Late Blight Season is Upon Us! 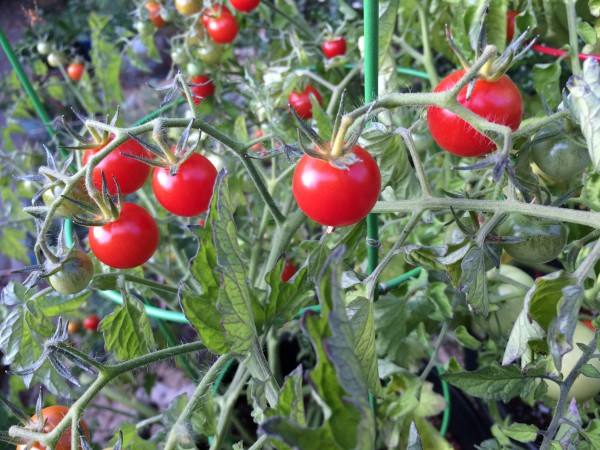 It’s mid-summer and you have your tomatoes planted in healthy, well-drained, nutrient-rich soil. You water your tomatoes with a soaker hose in the early morning before work. Your staking system is a work of architectural perfection. But with one swift wind on a cool, humid day, spores from an infected plant up to 30 miles away will send your picture perfect crop into a mess of brown spotted tomatoes and lesion-filled branches and leaves dusted with white spores. Just 3 to 5 days after the wind storm the battle with Tomato Late Blight has begun!

Luckily you can create allies with other neighbors, warning them to keep an eye out for symptoms, remove infected plants immediately, and begin a planning strategy for next year.  Daily monitoring of the leaves and fruit of the tomato plant, planting disease-resistant varieties, controlling volunteers from the previous year’s seeds and rotating crops will help all tomato gardeners win the war against Tomato Late Blight.

Anthracnose, bacterial leaf spot and blossom end rot are other tomato ailments with similar symptoms, but unlike other ailments, Tomato Late Blight will devastate an entire crop in days. Tomato Late Blight is the same blight that caused the Irish Potato Famine in the 1800’s. This blight can overwinter on live tissue in mild climates where the soils do not freeze, which brings the importance of crop rotation and volunteer tomato removal.

Tomato Late Blight (Phytophthora infestans) prefers high humidity, dew, wet weather and moderate temperatures between 50 to 80 degrees F.  Late blight symptoms can occur anytime during the growing season, but the disease may be slowed down by return of hot, dry weather.

Tomato, potato, petunias, tomatillo, eggplant, and most plants in the Solanaceae family.

Small dark brown to black, circular to irregularly-shaped, water-soaked lesions may begin on lower leaves and appear 5 days after infection. White spores, called “sporangia”, may be observed on brown lesions in humid conditions on the underside of leaves. Brown lesions can develop on stems and leaf pedicels. Fruit will have circular, greasy lesions and can occur at all stages of fruit production. The fruit may remain firm, but these spots can become leathery and grow to cover the entire fruit.

The gardeners are trying a one new one: ‘Lizzano’ from Territorial Seed Company. It is a semi-determinant cherry tomato. (Photo at top of page)